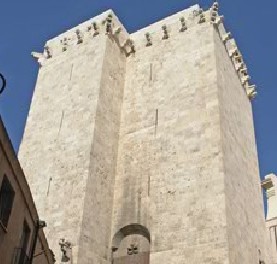 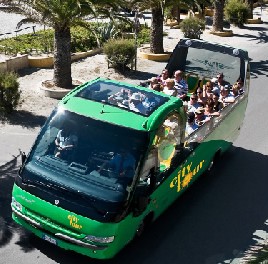 A unique and fun one-hour tour to visit the spectacular and characteristics sities that make Cagliari one of the most beautyful and welcoming cities in the mediterranean.
From the comfort of your seat, you will see the monuments and natural and architettural delights of the city from a different perspective, thanks to the unusual shape and size of yhe bus that can even drive throught tha walls and in to the acient city.
Throught the headphones, you will be informed all about the history and origins of the city's most important historical, cultural and social sites with details of its museums, architecture, art and shopping.
This is particularly interesting itinerary that will introduce you to and help you discover the ancient and more recent history of this delightful Mediterranean capitalEach seat is fitted with highly tecnological and multilingual audio system that will accompany you during your guided visit.

Dating from the early twentieth century, it was built in calcareous stone, witch gives it its white colour. The architecture is a harmonious balance between neo-gothic and early Liberty style. The exterior decoration and details were completed in 1914, the year the town council took place here. An unusual feature of the building is the two, octagonal towers that soar above the main facade, while the whole building surrounds a large courtyard.

2- SANCTUARY OF BONARIA
The origins of the sanctuary date back to 1324 and was commissioned by the Infant Alphonse of Aragon who decided to build a church here in order to offer spiritual assistance to the soldiers committed in the siege of the city. In 1370, the Mercenary Fathers found a chest containing a statue of a Madonna – the Blessed Virgin of Bonaria – in a stretch of water opposite to the church. The Blessed Virgin, which is now placed inside the splendid sanctuary, soon became a symbol for sailors and seafarers and in 1908 was named the Saint patron of Sardinia.

3- MOLENTARGIU'S PARK
Nowadays it's a regional nature reserve, in 1993 Molentargius Pound became the permanent home of pink flamingos, that chose these wonderful, wetland area for nesting. There is now a colony of over 11,000 birds, as well as 180 other species of birds, including purple gallinules, herons, stilt plovers, little agreets, mallards, snipes and coots.

4- BASTION OF SAINT REMY
This is a great urban complex, created between 1889 and 1902 using limestone from Bonaria Hill. It consists of three bastions of Saint Catherine, Saint Remy and Zecca (or Mint) that mark the boundary of the southern part of the Castle. It includes two large terraces and a covered walkway, as well as a delightful communication trench that connects it to Via Università. The spectacular, two-flight marble stair case offers access to the monument from Piazza Costituzione on the under part.

5- VIALE BUONCAMMINO
Viale Buoncammino is one of the most charming parts of the city. The long, narrow streets afford spectacular panoramic views of the Gulf of Cagliari, a mix of lights and outstanding natural beauty. Nearby there are the former gates to the old city and the ruins of a Roman Amphitheatre. Since 1859 the streets has been dominated by the city's new jail, which was built in two separated periods and it's considered inviolable and one of the safest in Italy. In the years, it has hosted many “illustrious figures” that marked the history of Sardinian banditry.

6- THE ROMAN ANPHITHEATER
This is without doubts the largest Roman monument in Sardinia, which was build in the 3rd century AD, although all that remains is the part carved into the rock that exploited the natural decay of the two walls of rocks where the two staircases were carved out. For years it was used as an open-air dump, but after becoming municipal property in 1866 it was returned to its former glory and natural beauty. Since 2000, the monument has hosted a series of theatre, opera and folk music shows.

7- MUSEUMS CITADEL
Located on the highest part of the castle, the area was once used as the Royal Arsenal. However, it wasn't until 1966 that works began to create the large museum complex, built by combining simple reinforced concrete structures with the ancient defensive buildings and calcareous rocks. It currently host the National Art Gallery, a collection of anatomical waxes, a collection of Siamese art and the Archaeological Museum, which host numerous finds dating from prehistoric-nuragic civilisation.

8- SAINT PANCRA'S TOWER
Formerly know as the "Lion's Gate", this was built in 1305 to host the Royal Jails, until these were finally transferred to the building on Buoncamino Hill. For centuries it was from this tower that the "Bad Bell" tolled to accompany those condemned to death on their way to the gallows. Around 37 metres tall, the tower took its name from the church dedicated to Saint Pancras, which is now the church of Saint Lawrence.

9- THE CATHEDRAL
The cathedral's origins date to the thirteenth century and it was built by architects from Pisa. Over the years the building has undergone a series of transformation and indeed only a few original elements, such as the side doors, remain. Similar to the original, the current facade was built around 1930 in Romanesque-Pisa-Lucca style. The twelve chapels and the presbytery, the crypt and the cathedral's treasures are very interesting.

10- ELEPHANT'S TOWER
This tower takes its name from the presence of a small, marble elephant on a ledge sunk into one of its corners. It was built in 1207 by the Pisans, it's about 38 metres tall and was used for defensive purpose. In the nineteenth century the tower was used as a jail for political prisoners. The imposing iron portcullises realized when it was built, have stood the test of time impressively. 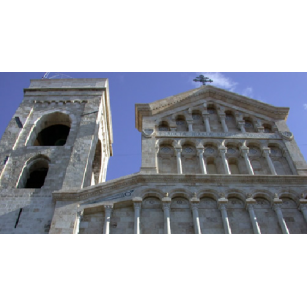 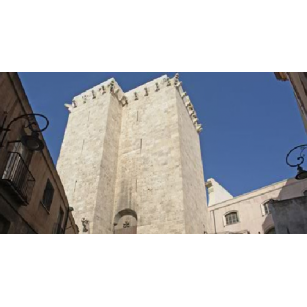 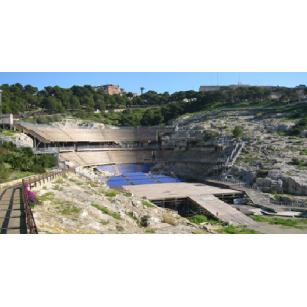 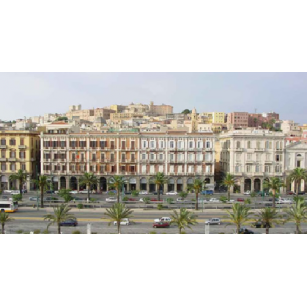 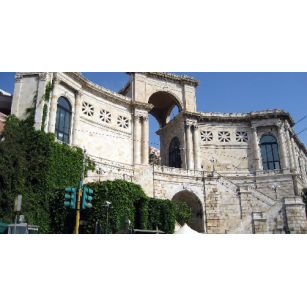 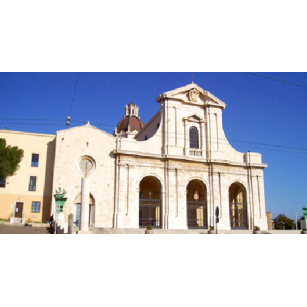